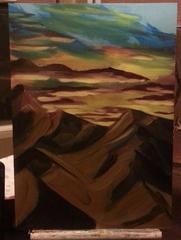 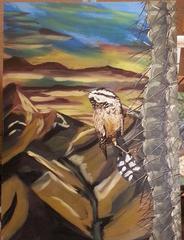 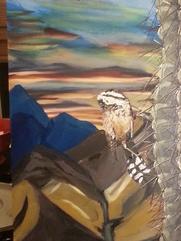 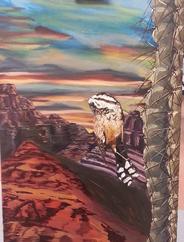 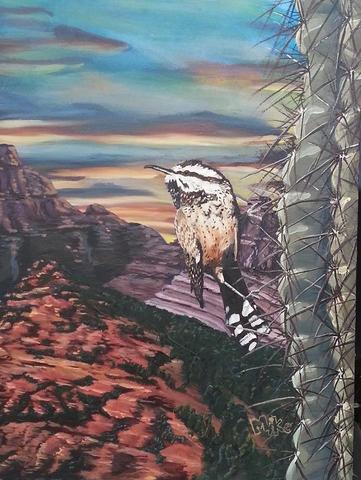 The cactus wren is the state bird of Arizona.  You probably see them and don't even notice, either because they are elegant in a modest way or because cammo is their standard outfit.

This painting was going to be the second desert holiday image as an Arizona wildlife nativity scene.  A cactus wren nest was to be the manger and baby Jesus represented by hungry chicks sticking their gaping beaks out of the nest.  "Joseph and Mary" wrens would perch on the sides of the nest with grubs or lizard tails in their beaks.

However implausible that scene seems to you, it would be even more implausible with scorpions and gila monsters serving as shepherds and wise men.  The concept quickly fell apart.

Anyway, the painting was to start with a bold sunset behind the immaculate conception nest.  Dramatic desert mountains would ground the composition.

The nativity idea fully collapsed when I found a cool image of a cactus wren clinging to the spines of a sahuaro tree. After the rugged loner of a wren was cast in the leading role, the mountains were out of their league.

The paint brushes had a long chat with the mountains.  It started amicably, and turned into angry words and lost tempers.  The Sonoran Desert Mountains left.

Fortunately in Arizona, the can't swing a dead cat without hitting a pretty mountain.  A few Red Rocks willingly sold their souls for a shot at the big time.  And now you have a cactus wren and its sahuaro tree implausibly overlooking a Sedona sunset.