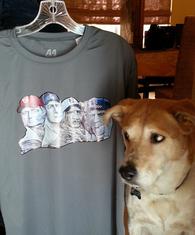 Mount Rushmore is often photographed but rarely painted.  And that is OK.  Mount Rushmore is a sculpture.  The original artist carved the image as he saw fit.  Good for him.  But in my opinion, it needed correcting.

And no, my argument is now with the personalities he chose for Rushmore.  These four mean are significant contributors to the  American personality. Just read their biographies and you will learn about their individual drive, perseverance, and sense of purpose that propelled each into history.  My problem with the original was that the presidents were not wearing hats.,

Mount Rushmore is in South Dakota.  Hot in the summer, and frigid in the winter, and not much better in between.  Anybody forced to be outside year-round in South Dakota should be wearing a hat. And since each man is strongly identified with his hometown, he is wearing the baseball hat from his local ball club.

So there you have it.  If I get any better a re-writing history, I will adjust the winning Powerball numbers from last Saturday's drawing.

Mount Rushmore (...as it should have been)

This painting was given the working title of "Suicide Note" about halfway through its completion...because IT WAS KILLING ME!  It is a quasi-monochromatic, multi-portrait, with a sculpture as the source material.  And I was still learning the basics of portrait painting.  It required endless tweaking.  But I had to soldier on due to the significance of the material.  The subjects were two founding fathers (we'll get to that "father" topic later), a spunky New Yorker who put a permanent stamp on history and geography (read: the Panama canal), and the humble guy from Illinois with the courage to fight inertia and end slavery. The  painting is now a conversation piece and is admired by orange and white dogs around the world!

As a native of Virginia, and as the namesake of Washington, DC, George gets the Nationals hat. Not to mention, the hat features a big "W".

Another Virginian.  Key accomplishments as a wordsmith, a diplomat, and as 3rd president. Don't forget that he Founding "Fathered"  several children after raping his slaves.  TJ must have been a Founding Fan of the Washington DC Negro League team.

Native of Manhattan and former NY Chief of Police, among other things. And the only Rushmore to be alive when his team was  in existence.