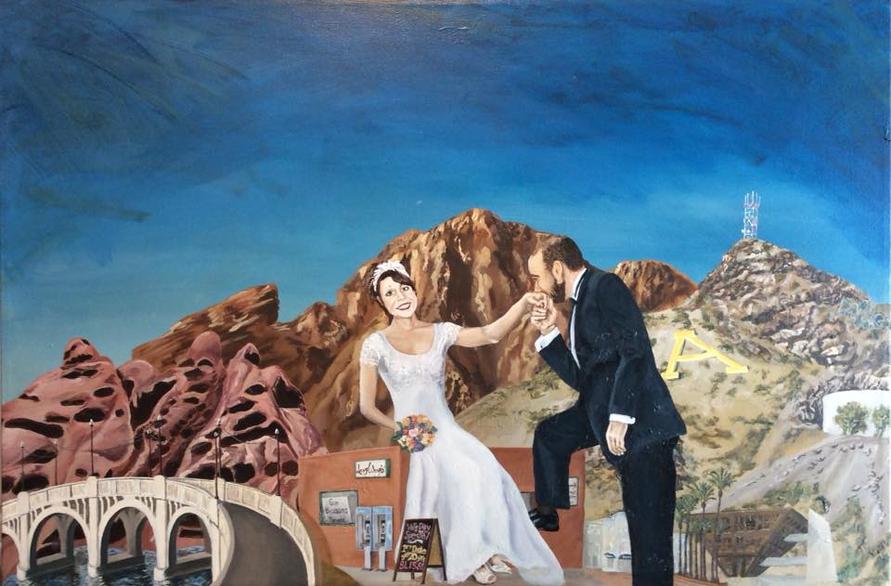 The romantics that come up with the themes for each wedding anniversary apparently designated the 20th anniversary as the "Canvas + Linseed Oil + Pigment anniversary."  That means that the best gift should be an oil painting.  But since it is a gift, we need to keep it quiet.  Don't tell anybody you know that has a 20th anniversary coming up in 2018.

March 18 - The background is shaping up.  Camelback Mountain in the back, then the Papago Mountains, and closer up in "A" Mountain in Tempe.  It will take another week or two to finish the mountains.

​April 1 - Almost done with "A" Mountain.  Then we paint the escape route out of Tempe. Then...we get to the "real" subjects!

​April 9 - Mill Avenue bridge has special meaning for long time Valley of the Sun residents. People who have lived here since the late 1800s know it is close to the site of Hayden's Ferry.  That was the original way to get across the Salt River.  Fast forward to the  1970s and 1980s, Mill Avenue Bridge was one of the few ways to cross the river in the winter and spring when the other crossings  would flood.  It was also how our Lovebirds fled ASU to Phoenix to start their family.

April 21 - The scenery is 95% finished with the addition of Tempe Mission Palms and the Tempe City Hall buildings. The Mission Palms hotel was a  big addition to the modernization of downtown Tempe that was happening while our newlyweds were on their first date. This painting is taking the shape of a mural with an emphasis on story telling. The individual pieces are not painted to scale and are not even in the right places.  But that just adds to the surrealism.

May 12 - The painting is finished. Allow me to introduce you to Mr. and Mrs. Gary and Vicki Stockton.  The Love Birds had their first date at the now defunct and demolished Long Wong's on Mill Avenue.  MikesPieHole.com asked Gary which band they went to see? Did they go to one of the Walt Richardson acoustic shows on Thursday night, or a weekend night of loud music and cold beer?   Because, you see, Long Wong's was the epicenter of a once thriving Tempe music scene.  We were excited to hear Gary's reply.

Gary quietly admitted that it was a Valentine's Day lunch date.  Brilliant!  You see, Long Wong's was a greasy spoon specializing in Buffalo Wings.  Congratulations to the Stockton's for building 20 years of bliss on lowered expectations on such a (romantic?) first date!

Hopefully, Gary fully redeemed himself with this surprise gift.