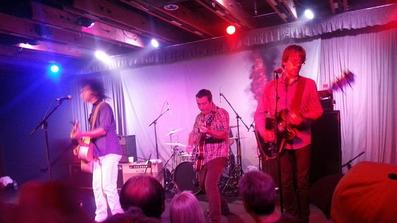 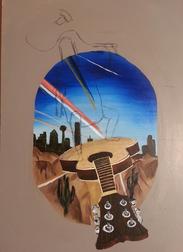 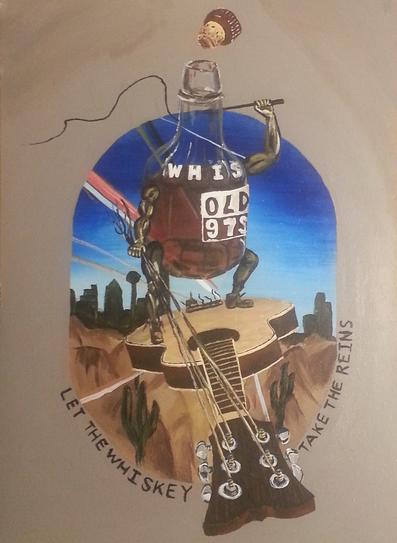 The Old 97s is a favorite band at Mike'sPieHole.com.  They are regularly playing on the iPod that fuels Mike's paint brushes. So when the band announced on Facebook that they wanted fans to design their next t-shirt, that was all  MPH.com needed to start searching the record collection for inspiration.   The band said using song lyrics would tickle the judge's fancy.

As a song, "Let the Whiskey Take The Reins" is a mid-tempo number about a guy feeling isolated and intent on self-medication.  This painting shows what happened shortly after the whiskey took over.

Our hero leaves behind an alien invasion, broken relationships, and general despair in Dallas (see the skyline... a gratuitous reference to the band's home town).  The whiskey is momentarily flying high before the inevitable crash in the Arizona desert (reference to the artist's adopted home state.)

Technically, this is not the highest quality panting. But the band was only looking for concepts...not print-ready art.  The artist still takes great pride in the composition.  Trading guitar strings for reins, and leaving the whiskey in control seemed right for a guitar-based alt country quartet and their boozing fans.

But alas, the winning design was a generic image very different from this "Whiskey Gone Wild" theme.  Sometimes it is better to lose in a blow-out.

Photos in clockwise order: The finished painting; tickets for a recent PHX show; Mike and Julie hanging with guitaristo Ken Bethea pre-show; the Old97s doing what they do (Ken center stage); in progress pic.