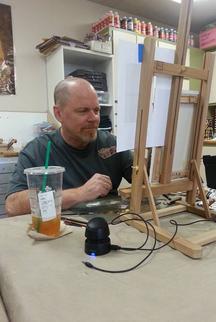 The text message came in with a picture of some bearded weirdo and the words: "Paint this!"

As a general rule, MikesPieHole.comdoesn't take orders from anybody.  That is the benefit of being a self-unemployed artist and full of angst.  Its all part of the image.  A little bit Andy Warhol, a little bit Edward Hopper, a little bit Salvador Dali, and a lot of Homer Simpson.

So I took a closer look at the pic.  It was none other than Chad Ackerley.  My former neighbor, my current ASU football season ticket neighbor, and my forever drinking buddy.  But what the hell is he doing in that beard and unkept hair? Some questions are better left unanswered..  I have painted dogs, cows, cactus, birds, rocks, and old dudes.  Why not paint Rip Van Ackerley?

So I got started.  Long story short... (Don't you love it when people say that?  It means the long story is about to get really long.) So I got started, roughed out a concept, decided to paint the face and come back to the beard, then I moved, then I sold my house, then I updated some plumbing fixtures, then I  took a short vacation, then I became an uncle.  Well, long story short, the facewas finished and looked pretty good.  The beard would only "weirdo" things up.  So here we are.

The concept is Chad on an October Saturday night around 7:00 PM in Tempe.  Its almost time for kick-off.  One or two  days stubble.  Friends all around.  Long story short: exactly where he wants to be. 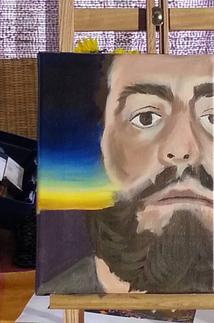 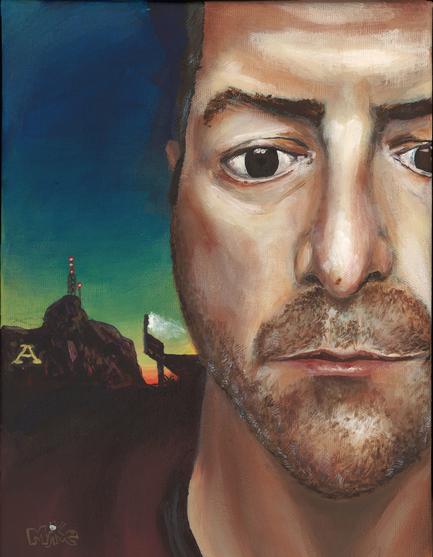