This painting was the first assignment for my first portrait painting class.  Why did I take a portrait class, you (didn't) ask?  Because my landscape painting teacher moved to Spain.  (Cue the Elton John music...  "Daniel is traveling tonight on a train, I can see the red tail lights heading to Spay-eee-yeeen...")  His successor specialized in portraits while earning an MFA as ASU.

This first assignment was a black and white portrait from a photo.  I found this pic of a Cuban guy.    For some reason, I chose acrylic paint as the medium.  A tube of white and a tube of black were acquired, and the photo became a painting that would turn into a series of paintings of old bearded dudes wearing hats.

Anyway, back to this image.  I focused on the things that made the pic interesting to me.  First, the guy's nose.  He must have been a boxer in his younger days.  Hopefully a good boxer.  Next, the cigar.  If I ever visit Cuba, I want to get a hand-rolled cigar and smoke it on the spot.  Maybe he rolled it himself.  Then the hat.  Maybe he grew the tobacco that is smoldering in the cigar.  And you can't ignore the hat.  Capturing the texture of the straw was important. And finally the beard.  How often does a Cuban campesino shave?  Dont answer that.  The truth is that his 2-3 days growth gives him character. This guy is an impoverished macho man, smoking a cigar that a lot of gringos would trade him a week of his salary to enjoy. 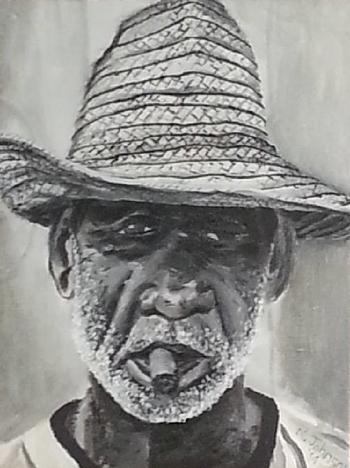