The Arizona flag puzzled me for many years.  In case you need a reminder, the flag has a copper colored 5 point star in the center.  The top half of the flag contains radiating slices of red and yellow while the bottom half is a deep blue.

The flag would make sense as an abstract landscape if the blue was the top representing the sky with the red and yellow stretching to infinity as the desert.

As mentioned above the red and yellow sunburst is on top, which is OK as is rises up from the horizon to represent our gorgeous sunsets.  And then the head scratcher is the blue that occupies the entire bottom half of the flag.  Why is the blue on the bottom?

It turns out that the blue bottom half of the flag is there to represent the sea...which is really a desert. WTH?  ​​This flag design metaphor is way above Captain Obvious' paygrade.

Even the America song "Horse With No Name" has lyrics that say: "the ocean is a desert with its life underground/and a perfect disguise above."

That brings us to a certain Old Man in this desert sea. Dave Johnson's family moved to Yuma when he was in high school.  He left for a few years of college and then a couple of decades of military service before returning to put down roots.

He has dermatology scars to show where the relentless Arizona sun made its way inside.  He has transition lenses to keep from squinting.  He has the Velcro shoes to show that fastening your shoes quickly allows more time enjoy life.  He has the stance of a man whose knees hurt, which led to a custom walking stick that serves as a portable greatest hits album.  It features an Arizona flag, the US Army and Field Artillery emblem, the Metallica logo is in the handle, and his favorite saying is carved into the shaft ("Fine as frog hair").  All that brings us back to the America song:

​"After nine days I let the horse run free/'Cause the desert had turned to sea/There were plants and birds and rocks and things/There was sand and hills and rings."

​There must be another verse that mentions Dave. 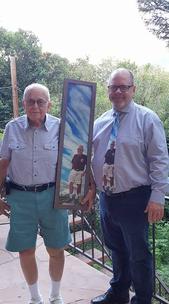 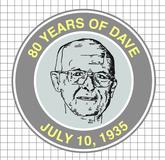 See the other
Musing about
Dave

The Old Man and the Sea