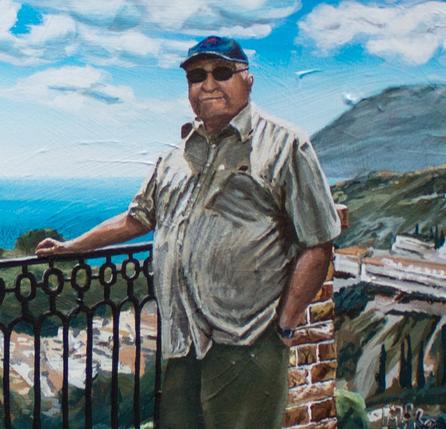 Ralph Longobardi, the international traveler, went to Sicily with his Uncle Tony from New York.  Ralph opened up his photo gallery so the vacation could be captured in oil.  Uncle Tony was a highlight of this guy's trip to the homeland, so it was fitting that the senior Longobardi  anchors the image.

Sept 25 and the landscape is blocked in. Color is getting pushed around.  My available evenings are happily spent on this painting.  But I am delaying the inevitable clouds.

October 11 and everything is roughed in.  Now it is time for texture and depth.

October 18 and work and other demands are conspiring against much progress.  Some texture is added to the village, and the brushes are starting to focus on the hills.

Nov 8 and my day job apologizes for being a shitty bitch that wants to dominate my life.  I do not accept the apology.

June 1 (yes, six months later) and after some side projects, Sicily is back to getting a paint job.  A lot has changed.  Ralph retired and pulled up stakes in Colorado and moved to North Carolina. And Uncle Tony is posing for his portrait.

June 4 and everything is in place.

July 6 and the painting is on its way to North Carolina.