The aforementioned Anna Parker is an artist in California (sounds fancy, don't it).  She makes a living painting murals, and feeds her soul painting various other things.

If you are in the southern half of California or live anywhere else and have a large enough mural budget, contact Anna through her website.  www.muralchemy.com

Check out examples of her work on the website.  Her hubby also remodels and does home improvements.  Mention MikesPieHole.com and get a discount on colorful stories about the Johnson boys. But expect to pay full price on their excellent work.

They say it takes a village to raise a toddler. Or maybe it is: you have to break a lot of eggs to make a Village Inn omelette. I am not sure.  But I do know that it did not take a village to build MikesPieHole.com.   It took a village idiot and a few of his friends to pull it off.

First, Julie named it MikesPieHole.com.  I thought that featuring any "hole" when talking about pies might not be appetizing.  But everyone else thought it was funny, entertaining, or appropriate, so I came around. Julie secured the domain name and the idea incubated.

Fast forward to a cold and not-so-blustery late December night in Arizona.  Two weeks of vacation, a cigar, and a bottle of wine went to the back patio with a newsprint pad and some charcoal to work out some logo ideas.  You can see the concepts that were floated to the FOVI (Friends of the Village Idiot).

Feedback included the word "offputting."   Here is a bit of professional advice: Do not ignore constructive criticism.  You don't have to follow the constructive part, but don't ignore the criticism part.  Anyway, I enjoyed the wine and cigar and scrapped the logo  concepts.

Early the next morning, Anna Parker (charter member of FOVI) sent the concept that you see now.  MPH.com staff colorized the concept, Gabriel V-Goldammer developed the digital image, and Chad Ackerley printed the  t-shirts.  Virtual Village and their pet idiot. 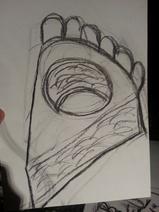 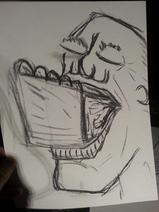 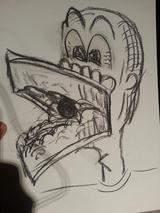 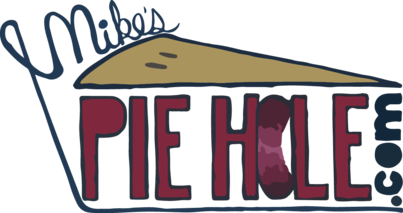