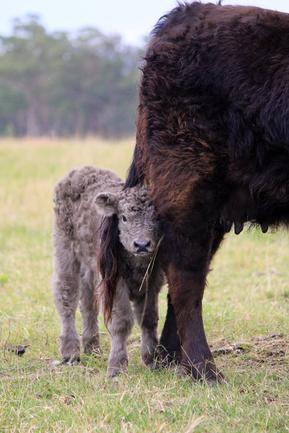 Amy Kennedy strolled into the Sydney, Australia branch of MikesPieHole.com.  The following dialog was transcribed from security camera footage.

AK: I saw your website. G'donya.  You could make a quid painting a portrait of my heifer.

MPH.com: You have a heifer?  Is that a cow, or some frumpy old lady you know?

AK: Yep, I have a pet cow.  She is a sweetheart. She is due to have her first baby next month, so I am going to be a grandma!

MPH.com: Send a pic and we will have our Senior Bovine Portrait Artist have a look.

AK: You will regret asking for photos.  This is Heidi, she is my love.  The breed is Galloway.  They are very hairy and come in different colours.  And this is Kilroy, a little bull calf that I took to a show recently.  And this is one of the recent calves on the farm.  Her name is Loretta.  And this is...

MPH.com:  ...OK, OK... We only have one Senior Bovine Portrait Artist, and he plans to retire one day.  So just one painting at a time.

AK: We bought an old government bus off Ebay for Heidi to raise her family.  We are renovating the bus.  Decorating is ace with hay bales and alfalfa...  I am having a baby shower for Heidi in a fortnight.

MPH.com: Baby shower for a cow?!?  Are you inviting Heidi's friends or your friends?

MPH.com: OK.  While you work on the calf shower, we will get to work on this portrait.

AK:  I became a grandma this morning.  Heidi had the calf.

MPH.com: We hope mama and calf are doing well.  Was it a boy or a girl? Have you chosen a name?

MPH.com: How about Lulu if its a girl and Lou if its a boy.

AK: I like Lulu for a girl.  If he grows into a bull, I plan to name him LL Cool Bull.  But if we snip him and he becomes a steer...

MPH.com: Then you would be left with Lou. 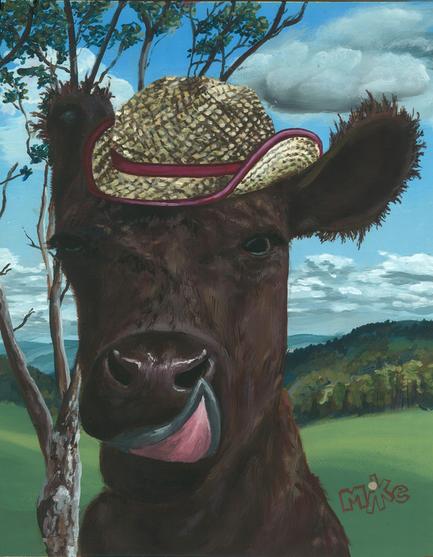